In this series of blog posts we will explore the common sorting algorithms on an array of numbers, the theory behind them, as well as how to implement them using python. Sources of inspiration and code base will be mentioned as we go along, but note that we are implementing illustrations of the various sorting functions, and clarity is given primary concern over optimality in our implementations.

We will split up the algorithms into several parts within our series, each dealing with 2 or 3 related algorithms. In particular, the following algorithms will be covered in this series:

Next we will start looking into the details of each algorithms.

So it works! However, the efficiency of the algorithms is not really promising (we will show this using larger test lists in the final part of this series, when comparing all the algos), and here’s why.

Best case is when all elements are already sorted. Bubble sort goes through the entire list once, confirms that all is sorted, and be done with it. Time complexity is therefore Ω(n).

In worst case where we have a reversed order list, the bubble sort we’ve implemented would need to perform n (or n-1) passes, and within each pass, make n (or n-1) comparisons. Note that here after we will focus on the terms relevant for calculating the big-O complexity (i.e. how the time complexity grows as the number of elements grow, but focusing on the highest order terms), and in that spirit, our average case scenario, while not requiring exactly n passes on average, still results in a big-O complexity of O(n2).

The following graph illustrates the time complexity. For each length of list from 5 to 100, I run 500 simulations on random lists, and count the number of comparisons required to finish the sorting. For example, n=60 is approximately 3000, which means that on average, a list of length 60 required 3000 comparisons from start to finish.

The line is a 2nd order polynomial approximation. Here we can see that it is a very good fit, reassuring us that the time complexity of the average case scenario is indeed O(n2). 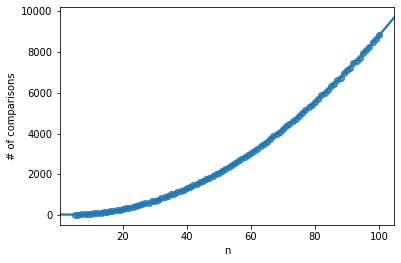 Notice how after each pass, the latgest i elements are already sorted into the correct locations. We can make use of this observation to improve the implemented algorithm, so that within each subsequent pass, we make fewer and fewer comparisons, since the last few elements are guaranteed to be in the correct order.

Unlike Bubble sort, which performs a series of immediate swaps, Selection sort finds (and selects) the minimal element from an unsorted list, and puts that selected element in order.

For Selection Sort, there is always the two nested loops to be performed, with the outer loop being the n passes, and the inner loop being the n-i comparisons within each pass. Therefore, for all cases, we have big-O complexity of O(n2).

Similarly to the simulation ran above for Bubble sort, here we can see that the 2nd order polynomial approximation is a very good fit for our time complexity, reassuring us that the time complexity of the average case scenario is indeed O(n2). 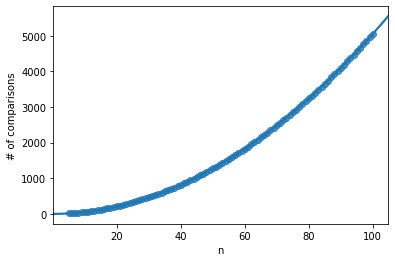 An easy way to understand insertion sort is to think of how (most) sort playing cards, as the cards are being dealt one by one. For example, you have a deck of 5 cards, and you have already sorted them as you got them. Now you are dealt a sixth card. How do you maintain the sorted order? You insert the new card into the existing cards, to the correct location where it belongs.

Very similar to Selection Sort, we also have two nested loops here, each growing linearly as n grows, resulting in an overall O(n2). However, in the best case scenario, where we have an already sorted list, the inner loop will always terminate on first comparison, essentially reducing the runtime to the outer loop, which is simply n. Keep this feature in mind, as we will see in Part 2, how we would like to take advantage of this feature to construct a hybrid sorting algorithm called Tim Sort, where insertion sort is used to perform sortings on smaller lists, since consecutive ordered elements are often observed in real-world data.

If you are feeling comfortable with the basic sortings we have covered here, please move on to our Part 2 of the series, Sorting Algorithms w/ Python (Part 2), where we will see how we can improve our time complexity so that we could sort more efficiently on larger lists.